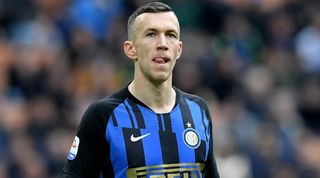 Tottenham and Arsenal have emerged as the favourites to land Inter Milan winger Ivan Perisic.

Perisic was formerly a target of Manchester United, but interest from Old Trafford has cooled recently – leaving north London as the likeliest destination for the Croatia international, according to Italian outlet Corriere dello Sport.

Spurs have not bought any new players in the last two transfer windows while waiting to move into their new ground – but are ready to spend big this summer.

Arsenal, meanwhile, picked up Barcelona winger Denis Suarez on loan in January after enquiries for Perisic led to nothing. Now, the're keen to push forward with renewed vigour in the summer.

Perisic’s availability could depend on whether Inter successfully bring in Antonio Conte to replace current manager Luciano Spalletti this summer.

QUIZ Can you name the Tottenham and Real Madrid teams from Spurs’ last Champions League game at White Hart Lane?