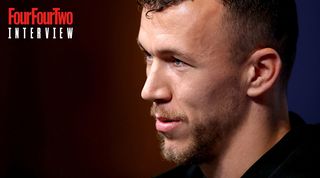 The Croatia international – who scored in both the semi-final and final of the 2018 World Cup – continues to be linked with the Red Devils, who were unwilling to match the Nerazzurri’s £50 million asking price for the winger around 18 months ago.

Perisic’s World Cup heroics in Russia came off the back of a successful season in Serie A, as Inter secured a return to the Champions League for the first time since 2012.

But the 29-year-old admits he came close to leaving Italy before the last campaign kicked off, having been flattered by admiration from United supremo Jose Mourinho.

Speaking exclusively in the January 2019 issue of FourFourTwo, out Wednesday, Perisic says: “It’s true that an offer from Manchester United was on the table – I was really close to leaving Inter.

“When Luciano Spalletti arrived [in June 2017], he showed tremendous desire to keep me in the team and made it clear he didn’t want to lose me. That was very encouraging, and I haven’t regretted my decision to stay at Inter. In football, small details in these situations are key.

“Admiration from a coach like Mourinho is definitely something that flattered me. It’s confirmation of hard work and good performances. When you’re praised by a guy like Mourinho – the manager of a huge club like Man United – it’s difficult not to think about such an offer. I’m glad he has a high opinion of me. These things motivate me to work and train hard, to achieve the best performances.”

Perisic has now made more than 130 appearances for Inter after spending four years in Germany at Borussia Dortmund and Wolfsburg. Although a move to Manchester has yet to materialise, the Croatian still hopes to ply his trade in England one day.

“In football, you never say never,” he says. “From the beginning of my career, I’ve had the ambition to play in as many big leagues as possible, and I still have that desire to test myself in other leagues. And I mean in the Spanish or English leagues.

“I hope Inter fans understand my point of view. I’m an athlete and a professional, I like challenges and this is my driving force. What the future will bring, I don’t know. Now I’m focused on Inter, as we try to make a bigger step forward from last season.”

Read the full interview with Ivan Perisic in the January 2019 issue of FourFourTwo magazine, out on Wednesday. The 2018 awards special features interviews with Goal of the Year winner Gareth Bale, Man of the Year David Silva and English Player of the Year Lucy Bronze. Plus, we go One-on-One with Michael Carrick, and hail Gareth Southgate, Virgil van Dijk and Comeback of the Year winner Hardlife Zvirekwi, who returned to action in Zimbabwe despite having a hand amputated.