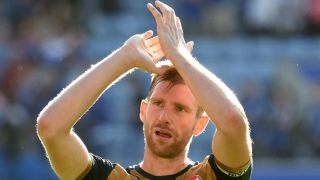 Per Mertesacker claims that sealing back-to-back victories has given Arsenal a well-timed confidence boost ahead of their Champions League clash with Olympiacos.

Arsene Wenger's side, playing in their 18th consecutive campaign, host the Greek champions on Tuesday as they look for their first victory in Group F.

Arsenal were dispatched 2-1 by Dinamo Zagreb on matchday one, while Olympiacos also tasted defeat in losing 3-0 at home to 2013 champions Bayern Munich – their only loss of 2015-16 so far.

The clubs have been drawn together at this stage in three of the previous six seasons, with the home side prevailing in each of those meetings.

And Mertesacker, who started his first Premier League game in over a month in place of the suspended Gabriel in the Alexis Sanchez-inspired 5-2 win over Leicester City on Saturday, believes that Arsenal are coming into their best form.

"We were quite happy after the win [against Tottenham in the League Cup] in midweek. We took some of that confidence with us [to the Leicester game] and you could see that," the defender told Arsenal's official website.

"There is a little room for improvement but I think we should take more confidence into the game on Tuesday in the Champions League.

"Obviously it is very tight but we want to continue it against Olympiacos and next weekend against Manchester United, too.

"We struggled defensively [at Leicester] but I'd say we got back to our striking force and more than four goals is something very special.

"At times we lacked defensive stability but that is normal at Leicester. It was good for me to get some game time [because] I still lack a bit of fitness."

Having not scored in 2015-16 prior to Saturday's clash, it was Sanchez who stole the headlines against Leicester with his hat-trick, but Theo Walcott was again impressive in a central role, and is likely to start on Tuesday with Olivier Giroud suspended after he saw red in Zagreb.

Another attacking option for Wenger could be Joel Campbell, who netted 11 goals in 43 appearances for Olympiacos during a season-long loan spell in 2013/14 – with the Costa Rica forward having made just two appearances so far this term.

Olympiacos coach Marco Silva will be hopeful that experienced striker Alejandro Dominguez can return to action after not playing since picking up a thigh strain against Bayern, though the visitors will certainly be shorn of Luka Milivojevic (suspended).

For Arsenal, Danny Welbeck (knee) is definitely out while Francis Coquelin is a doubt, also with a knee problem.