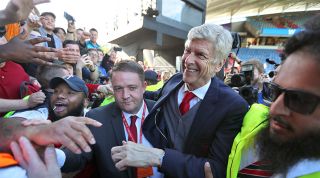 Arsene Wenger could be back in management sooner rather than later, with an offer on the table from Japanese club Vissel Kobe.

If he were to take the job, he would be reuniting with former Arsenal striker Lukas Podolski at the club. Former Barcelona trio Andres Iniesta, David Villa and Sergi Samper are also part of the squad.

Wenger has previous in Japan, having managed Nagoya Grampus Eight for a season in 1995, before he was brought over to Arsenal to revolutionise the Gunners and English football as a whole. He speaks the language, and is understood to be considering a two-year-contract worth €4 million a year.

Speaking to the press this week, Wenger said: "Originally I said I want to manage straight away again. After that I thought maybe I take a little distance."

He was linked with the vacant Real Madrid job earlier in the season before Zinedine Zidane resumed the role, and apparently rejected an offer from Fulham to be their boss.

A left-field move? Maybe, but Wenger has never been one to do what's expected of him, and clearly, he feels his career in football is far from over.

Arsene Wenger: "When Arsenal played their first match without me, it felt strange."