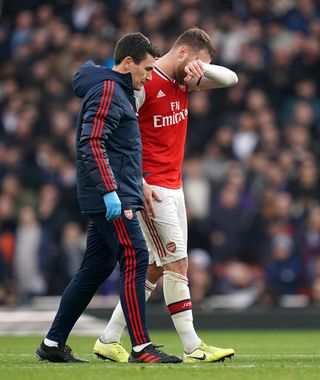 Arsenal head coach Mikel Arteta has admitted the club could be more active than expected in the January transfer window after Calum Chambers had surgery on Thursday.

The centre-back suffered a knee injury in the defeat to Chelsea on December 29 and is set to be sidelined for a lengthy period of time.

It leaves new boss Arteta short of options in defence and he will meet with technical director Edu and head of football Raul Sanllehi this week to mull over plans for the month.

Asked what fans can expect from Arsenal in the winter window, the Spaniard said: “That we will try to be in the market to see options that can strengthen the team, that’s for sure and our obligation and we will be working on that.

“My obligation is to give my opinion on the things we can improve. Obviously we have a bad injury with Calum a few days ago that will change our plans at the back.

“The reality is we will not be able to do much. I’m more concerned about getting players back from injury and try to improve the players I have here, get everybody on board and understanding what we’re trying to do.

“And if something extra comes up and we think it is the right opportunity to improve what we have, then let’s do it.”

When we play togther with an atmosphere like yesterday, we can do big things !! Thanks to the fans for all your energy and support !!Here’s to 2k20 💥 pic.twitter.com/czNz8psTqn— Alexandre Lacazette (@LacazetteAlex) January 2, 2020

Chambers’ injury was described as “significant” by Arteta and while he did not want to put a timescale on his recovery, he conceded: “It is not looking good.”

While Arsenal may now be more active in terms of recruitment this window, the Gunners head coach was firm on the future of captain Pierre-Emerick Aubameyang, who has only 18 months left on his contract.

“I don’t even think about the possibility with Auba (leaving),” Arteta said. “I want him here.”

The forward captained Arsenal to a 2-0 win over Manchester United on New Year’s Day – their first victory at the Emirates since October 24.

For former Man City assistant coach Arteta, that performance is the benchmark going forward for his players.

He added: “I hope so, that this is the least we have to expect from the team. There are many areas I would like to improve for sure.

“But as well in this short time we have been together, to see such a change is encouraging for me and I’m pleased with that.”

💬 "I am so happy that I turned around in the stadium. I saw smiley faces, I saw energy, I saw people standing and that's what I want."— Arsenal (@Arsenal) January 2, 2020

Arsenal were only four points above the Premier League relegation zone before the result over the Red Devils and while happy with the display, the new head coach knows it is just one small step in the right direction.

“I knew about the job and how big it would be,” Arteta said. “The challenge? Maybe it is a little bit bigger than expected.”

The focus of the former club captain will turn to the FA Cup now with Leeds set to visit the Emirates on Monday for a third-round tie.

Marcelo Bielsa’s men are top of the Sky Bet Championship and the Arsenal boss expects them to be in the Premier League next season.

Arteta said: “How he makes them fight and run and challenge and compete and never give up in any game under any circumstances.

“The way they play, the manner they behave. I followed their coach for a long time and I know how tough it will be.”