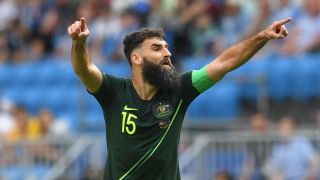 Daniel Arzani hailed the "commander" of the Australia team Mile Jedinak and revealed the captain's words to the squad following Thursday's 1-1 draw with Denmark.

Jedinak converted from the spot for the second game in succession at Russia 2018 to cancel out Christian Eriksen's classy opener in Samara.

France's subsequent 1-0 win over Peru means the Socceroos need to defeat Los Incas and hope Didier Deschamps' men overcome Denmark to have any chance of reaching the last 16 for the first time since 2006.

Arzani - the youngest player at this year's finals - looked sharp when he came on midway through the second half and the teenage midfielder had words of high praise for Jedinak, now Australia's second highest scorer in World Cup history behind Tim Cahill.

"He's the leader, the commander of the team and when he steps up for the penalty everyone knows he's going to score because he's so consistent on and off the field," Arzani told reporters.

"He's a great guy, when he speaks everyone listens. He was telling us we played well and should be proud and we're not out of it yet.

"It was very similar to the France game but at the end of the day if we get a win we're very likely to get through to the next round."

"There's everything to play for and nobody needs to boost the players," added Jedinak. "Everyone knows we've got a chance still and it'll be about making sure we prepare right and the motivation will be there I'm sure.

"It'll mean an awful lot, we're not there yet and we'll put in an almighty effort to get there but we'll need luck and that's why we play this game."

Jedinak shrugged off Denmark keeper Kasper Schmeichel's attempts to put him off with some choice words prior to the spot-kick being taken.

"A goalkeeper will try to do whatever he has to do to try and make himself feel bigger than what he is. It is what it is," said Jedinak, who was asked exactly what Schmeichel said, just as the Dane walked behind him in the mixed zone.

"It's not important, maybe you should have asked him!" Jedinak said.