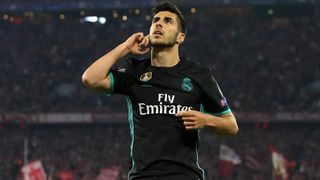 Real Madrid star Marco Asensio is staying with the European giants, according to his agent.

Asensio, 22, has been linked to the likes of Liverpool and Chelsea after starting just 19 of Madrid's 38 LaLiga games last season.

The Spain international was signed by Madrid in late 2014 and has played the past two seasons with the Champions League holders.

Despite being linked with a move from the Santiago Bernabeu, Asensio will stay – his agent Horacio Gaggioli said on Monday.

"He's improving all the time. Next season I think he'll be very important in Madrid."