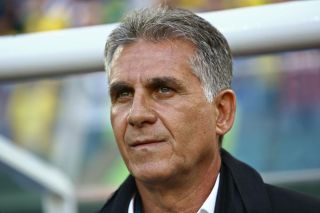 Iran - Australia's arch-nemesis after cruelly preventing the Aussies from qualifying for the 1998 World Cup on away goals in Melbourne - will be led by Portuguese boss Carlos Queiroz once again as Team Melli continue in their efforts to reclaim the mantel as Asian's leading football nation.

Though Iran did not make it out of their group at the World Cup in Brazil, Quieroz's men were more than a match for their opponents on the South American continent.

After playing out a goalless draw with Nigeria in their group opener, Argentina captain Lionel Messi struck a 91st-minute injury-time winner to break the hearts of Iran, who went on to lose 3-1 to Bosnia-Herzegovina in the final match.

Iran - ranked 51st in the FIFA rankings - have only managed to play one game since the World Cup, defeating South Korea 1-0 in an international friendly in November. A friendly scheduled for December 28 against Palestine was cancelled due to "technical" problems.

Despite the lack of preparation and the sudden departure of assistant coach Ali Karimi, Iran are determined to relive the glory days of the 60s and 70s, which saw them win three consecutive Asian Cup titles between 1968-1976.

Qatar arrive Down Under in red-hot form after overcoming Saudi Arabia 2-1 to clinch the Gulf Cup title in November.

Goals from Al Mahdi Ali and Khoukhi Boualem at King Fahd Stadium saw Qatar win the tournament for the third time, providing the perfect springboard for a serious assault at the Asian Cup.

Prior to that run in the Gulf Cup, Djamel Belmadi's Qatar - ranked 95th - had won four successive games, including a shock 1-0 victory over Asian Cup hosts Australia in October.

Once the whipping boys of Asian football, United Arab Emirates - led by Mahdi Ali - are slowly emerging as a threat to many teams.

A goalless draw at home to Australia in October inspired a spirited run at the Gulf Cup, where they made it to the semi-finals, eliminated by Saudi Arabia.

Their improvement on the pitch is reflected in the FIFA rankings, with the UAE 85th in the world.

Bahrain have barely made an impact at the Asian Cup, having only made it past the group stage in 2004, when they finished fourth.

They were, however, a tricky opponent throughout World Cup qualifying as they fell a mere point shy of the fourth round.

He may not be playing for Iran or Qatar, but UAE midfielder Omar Abdulrahman is expected to set the Asian Cup alight in 2015. At 23 years of age and 26 internationals caps to his name, Abdulrahman has already trialled at Premier League giants Manchester City and resisted the glitz and glamour of Europe to remain with Al Ain in his homeland. Some of Europe's elite continue to monitor the little afro-wielding magician, and a stellar showing at the Asian Cup could finally see him make the leap.

The clash between Qatar and Iran in Sydney on January 15 could well decide top spot in Group C.  Winning the group could well prove pivotal to the pair's cup hopes, with defending champions Japan expected to dominate in Group D ahead of Jordan, Iraq and Palestine.