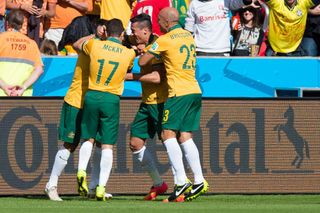 After some impressive performances at last year’s World Cup in Brazil, results in friendlies have failed to follow, but it has been all about regenerating the squad for this tournament and beyond for Socceroos coach Ange Postecoglou.

Now they have the opportunity to prove things are on the right track in a tricky Group A against Kuwait, Oman and South Korea.

First opponents Kuwait have endured a tumultuous build-up to the Asian Cup after the sacking of Brazilian coach Jorvan Vieira following their disappointing performance at the recent Gulf Cup.

New boss - Tunisian Nabil Maaloul – has had just one month to prepare the squad and as such is expected to take a cautious mindset into this match and try and hit the Socceroos on the counter-attack.

With that in mind, Postecoglou is likely to select a particularly attacking side to try and combat what is likely to be a compact and deep-lying Kuwait defence.

The Socceroos boss is likely to stick with his preferred 4-3-3 system although with a slight tweak, with two number 10s to be deployed in front of skipper Mile Jedinak.

This is the area of the pitch causing the most consternation for the boss, with a number of candidates to fill the roles.

Veteran Mark Bresciano is favourite for one of those spots, with the other likely to go to either Tommy Oar, Massimo Luongo or James Troisi.

Mat Ryan is likely to get the nod in goal with Ivan Franjic, Alex Wilkinson, Matthew Spiranovic and Aziz Behich to make up the back four.

Australia’s greatest-ever goalscorer Tim Cahill will lead the attack but Postecoglou has to decide on who his wingers will be.

It is likely to be a more narrow attacking three, with Robbie Kruse and Mathew Leckie the leading candidates but in-form A-League attacker Nathan Burns is pushing hard for a start in that trio.

But the Socceroos would be foolish to underestimate the nation known as “The Blue”.

Kuwait, winners of the Asian Cup back in 1980, have a good record against Australia, losing just three of 10 previous internationals, while also winning on Australian soil in Canberra in 2009 with a goal from defender Musaed Neda in an Asian Cup qualifier.

Goalkeeper and skipper Nawaf Al Khaldi brings experience and quality at the back, while Yousef Nasser and Bader Al Mutawa are other players to watch.

If Kuwait could snatch a point from the opening match they would be delighted, but only a victory will do for the Socceroos, who will hope a winning start will give them the confidence boost to go deep into the tournament.