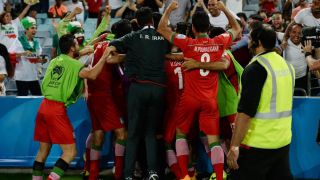 Iran and United Arab Emirates have qualified for the Asian Cup quarter-finals, but their clash on Monday is important for a different reason.

Topping Group C is likely to be a huge advantage, with the second-placed team set to meet Japan in the last eight.

Iran, who have been one of the most impressive teams at the tournament in Australia, sit second to UAE heading into the meeting in Brisbane.

Carlos Queiroz's men dominated Bahrain in a 2-0 win and overcame Qatar 1-0 in their most recent outing.

Out wide, Ashkan Dejagah has impressed, while Sardar Azmoun scored the winner against Qatar.

UAE have also been strong, scoring six goals and conceding just two in their two victories so far.

In Ali Mabkhout, UAE have a player who has scored three times – second most for the tournament.

Attacking midfielder Omar Abdulrahman has been impressive, and he hopes to see his fellow forwards continue scoring.

"Of course I’m very close to Ali Mabkhout and very happy that because of his performances he is the leading scorer for this competition," he said.

"We will work very hard to help them score more in the coming matches and hope that one of them will finish as the competition’s top scorer."

The clash at Suncorp Stadium is set to bring the questionable surface into the spotlight once more.

Patchy would be the kindest way to describe the pitch, which has come in for criticism from coaches and players.

Humid conditions may also have an impact, but both teams will need to adjust quickly to a pitch that is difficult to play on.

Expect Iran to dominate possession, but UAE have enough attacking quality to punish them as both teams look to avoid Japan in a quarter-final.