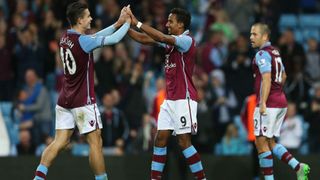 Scott Sinclair scored a hat-trick as Aston Villa came from behind three times to claim a thrilling 5-3 victory over Notts County in the League Cup second round.

A stunning finish from former Villa youngster Graham Burke appeared to send League Two side County on their way to an upset, but Sinclair netted a controversial penalty and then found the winner in the first half of extra time with a simple close-range strike.

An excellent long-range effort from Genaro Snijders earlier saw County take the lead in the opening stages before Adama Traore, who later came off with an injury, levelled matters on his first start since joining from Barcelona.

Jon Stead's penalty in first-half injury time meant Ricardo Moniz's men went into the interval with a slender advantage before Sinclair tied things up in the 50th minute with his first.

Burke unleashed an unstoppable curling effort that flew in off the post, only for Sinclair to force extra time from 12 yards.

The winger then turned home Joe Cole's cut-back in the 99th minute, with Joe Bennett's first goal for Villa from 20 yards making sure of progression as a valiant County effort ended in heartbreak.

Tim Sherwood made nine changes to the Villa side that lost 2-1 to Crystal Palace in the Premier League at the weekend and they fell behind after 16 minutes as Snijders let fly with a fierce effort that took a slight deflection, leaving goalkeeper Mark Bunn with no chance.

Izale McLeod fired wide from the edge of the area for the visitors, who were punished for their profligacy as Traore coolly slotted the ball past Roy Carroll following great work from Jack Grealish.

Jordan Ayew, Traore and Sinclair all went close to completing the turnaround, but, on the stroke of half-time, County regained the lead when Stead powered his spot-kick into the top-left corner after McLeod had been fouled by Bunn.

Shortly after the restart the instrumental Grealish helped tie things up again as he worked his way down the left and pulled the ball back for Sinclair to tap into an empty net, only for Burke to stun the Villa Park crowd with his moment of magic.

Nathan Baker went close for Villa as his 64th-minute header was cleared off the line, but the hosts found a leveller 12 minutes from the end of normal time as Sinclair lashed into the bottom-left corner from the spot after Stanley Aborah was dubiously ruled to have fouled Kieran Richardson.

Carroll twice stopped Sinclair from completing his treble in normal time, but the former Manchester City man was not to be denied again as he was presented with the easy task of converting from Cole's excellent right-wing cross before Bennett made sure of a happy end to a nervy night for Villa.