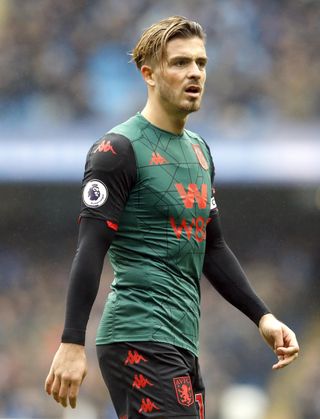 Aston Villa skipper Jack Grealish is winning his race to be fit to face Liverpool.

The midfielder sat out Wednesday’s 2-1 Carabao Cup victory over Wolves with a calf injury.

He took a knock in the 3-0 defeat at Manchester City but should return for Saturday’s visit of Premier League leaders Liverpool.

Boss Dean Smith said after the Wolves win: “He’s OK. He’ll be pushing to be fit for Saturday. He wasn’t fit (for Wolves) but I wouldn’t have picked him anyway. He’s responded really well.

“I never worry too much when it’s a contact injury, a dead calf – he’s got a small bleed on his calf and he’s responded well to treatment.

“He was here tonight in his fashion, his compression jeans with holes in which probably lets the cold air get to his calf as well.”

Villa reached the last eight for the first time since 2012 with Elmohamady’s first goal in over a year coming three minutes after Patrick Cutrone levelled for Wolves.

“We dominated, both teams made a lot changes,” Smith added. “My only gripe is we didn’t put the game to bed earlier with all the possession we had.

“We gave them opportunities to score and they took that. There was a crazy two minutes. Jed (Steer) made a good save but we saw the game out comfortably.”

It was the club’s 21st game of the season as they compete in the Europa League and Premier League, and boss Nuno Espirito Santo has promised his youngsters more chances.

He said: “They worked hard. I’ve told them to keep on working next time because the chance will come, they must believe more in themselves, there is a lot of talent.

“They do it in the training sessions every time, so let’s work hard and keep on bringing through players.

“Villa are a good team, they had good possession of the ball, but I don’t think they harmed us too much and we had chances, so I’m proud of the boys.”