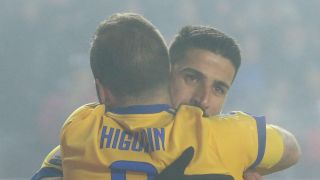 Juventus will take a slender advantage into their Coppa Italia semi-final second leg against Atalanta after securing a 1-0 win at a fog-laden Stadio Atleti Azzurri d’Italia.

Massimiliano Allegri's side did not quite show the form that had seen them win their previous eight games - a run that has seen them concede just one goal -  but comfortably held their hosts at arm's length for much of the match.

Gonzalo Higuain - clearly buoyed after ending his six-game goal drought against Chievo on Saturday - got them off to a blistering start with a fine goal after just three minutes.

The hosts rarely threatened their more illustrious opponents, but Alejandro Gomez wasted a golden opportunity to pull them level in the 24th minute when his penalty was thwarted by Gianluigi Buffon.

Chances were at a premium in a desparately poor second half, with Juventus seemingly content to take a narrow lead into the second leg at the Allianz Stadium on February 28.

Buffon was making his first appearance since the 1-0 win over Napoli on December 1 and would have scarcely seen Higuain's superb early opener, given the thickness of the fog in Bergamo.

And given the dense fog in Bergamo, it is unlikely that the legendary stopper would have seen much of Higuain's superb early opener.

The 30-year-old collected Miralem Pjanic’s pass just outside the penalty area, shimmied past two defenders and stroked a composed finish into the bottom left corner of Etrit Berisha's net for his 11th goal of the campaign.

A clearly shell-shocked Atalanta struggled to find their footing in the game after that early blow but were handed the chance to level midway through the first half.

After reviewing video footage, referee Paolo Valeri deemed Medhi Benatia to have deliberately handled the ball inside the area. From the resulting spot-kick, Gomez could only conspire to deliver a belated present to Buffon, giving him ample time to get down and repel his tame effort.

Gomez's wastefulness should have twice been punished before the interval, but Higuain and Blaise Matuidi both thrashed shots over the crossbar from promising positions.

Any thoughts of Juventus running away with the tie were soon dispelled by a tepid start to the second half, with Atalanta refusing to throw bodies forward in search of an equaliser.

When gaps did start to appear in the hosts’ backline, Mario Mandzukic bundled a header wide and Higuain dragged a low effort past the post.

Atalanta almost found an unlikely leveller with two minutes remaining as the under-worked Buffon raced off his line to block Hans Hateboer’s shot and preserve Juve’s lead ahead of an intriguing second leg.