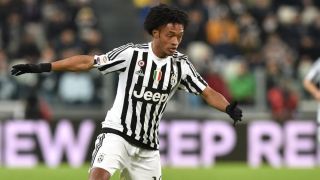 Juan Cuadrado has urged Juventus to maintain their intensity in order to make Serie A top spot their own ahead of Sunday's visit to Atalanta.

Juve survived a thrilling second-leg comeback from Inter in the Coppa Italia semi-final on Wednesday to clinch a place in the final. Massimiliano Allegri's men were beaten 3-0 on the night after winning the first leg by the same scoreline but prevailed on penalties at San Siro.

With a place in the Coppa showpiece secured, focus now shifts to the pursuit of a fifth consecutive Serie A title.

The Turin club are three points clear at the top having overhauled Napoli, while the winner of Friday's meeting between Roma and Fiorentina can move within five points of Juve.

Juve should be confident of maintaining their advantage at the top, having not lost to Atalanta in Serie A since February 2001.

Cuadrado told Juve's website: "Inter played very well on Wednesday night and capitalised on one of our weaker performances of the season so far.

"All that matters now is that we have a Coppa Italia final to look forward to and that will keep us motivated until the end of the campaign.

"The key now is to tackle each game with the right mindset and make sure we are just as focused from one week to the next.

"We want to make top spot our own but doing so certainly won't be easy. We have to make sure that we keep our intensity levels high both on Sunday and right through until June because the season is far from over and there are a handful of very good teams in hot pursuit.

"One of our objectives, reaching a cup final, has been ticked off and now our focus can switch back to making sure we remain in first place in Serie A."

There are no new injury worries for Juve, who remain without defenders Martin Caceres (Achilles) and Giorgio Chiellini (calf).

Mauricio Pinilla (calf) is still a doubt for Atlalanta, who are minus the services of winger Alejandro Gomez.

Atalanta are seven points above the relegation zone and without win in 12 matches going into this weekend's encounter.

But coach Edy Reja remains hopeful his side can spring a surprise and end a 15-year wait for a league success against Juve.

He told Radio Rai: "Sometimes there are surprises and you can get points where you don't expect them."

- Juve have found the net in each of their last 26 Serie A games against Atalanta, scoring 59 goals in the process (2.3 goals per game on average).
- Atalanta have lost more games (61) and conceded more goals (197) against Juventus in Serie A than against any other team.
- Juve have failed to find the net only once in their last 17 league games, while Atalanta have not scored a goal in eight of their last 17 matches.
- Atalanta are currently on their longest winless run (12 games) in a single Serie A campaign since December 2004.