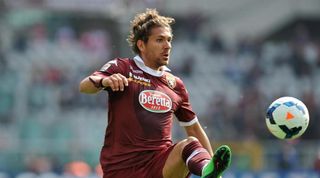 The 27-year-old has been linked with a move to Atletico throughout the transfer window, and will put pen to paper on a three-year deal at the Vicente Calderon subject to a medical and the agreement of personal terms.

Cerci starred for Torino in Serie A last season, scoring 13 goals in 37 appearances to help the club to a seventh-placed finish, and that form has persuaded the Spanish champions to spend a reported €16 million (£12.6m) on his services.

"It was a clear objective to strengthen out squad ahead of this season," he said.

"[Cerci] will provide us with speed [and] goals."

Cerci's form last term earned him a spot in Italy's World Cup squad, although he only made one substitute appearance in Brazil as his country were eliminated at the group stages.

The former Fiorentina and Roma man will become Atletico's eighth major signing of the transfer window as coach Diego Simeone rebuilds following the departures of the likes of Diego Costa, Thibaut Courtois and Filipe Luis.