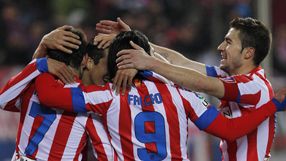 Atletico's city neighbours Real turned in one of their best performances this term and Cristiano Ronaldo and Angel di Maria each scored twice as the champions crushed Valencia 5-0, although they are still 15 points behind arch rivals Barca in third with just over half the season played.

Barca crashed to their first reverse of the campaign when they let slip a two-goal lead and were beaten 3-2 at Sociedad on Saturday and Atletico maintained their perfect home record with an efficient performance against Valencia-based Levante.

Diego Simeone's resurgent side, whose latest victory was soured by an injury to top scorer Radamel Falcao, have won all 10 of their league matches at their Calderon stadium and are second on 47 points from 20 of 38 games.

Barca have 55 points, while Real, whose erratic form has effectively ended their hopes of a second successive title, remain seven adrift of Atletico on 40.

Adrian fired Atletico ahead in the 32nd minute when he connected with a Javi Manquillo centre at the far post and his first-time shot from a tight angle went into the net off Levante defender David Navarro.

Midfielder Koke curled in a second from the edge of the area on the hour and Atletico have now gone a club record 10 games in all competitions without conceding a goal at home.

They have won 18 home matches in a row stretching back to last season, equalling their previous best run between 1939/40 and 1940/41 when the club were called Atletico Aviacion.

Simeone said breaking records was all very well but he wanted his players to focus on Thursday's King's Cup quarter-final second leg at Real Betis, when Atletico will be protecting a 2-0 lead from Thursday's first leg.

"The statistics are important but we won't spend time looking at them," the Argentine told a news conference.

"Now we have a very tough game [against Betis] in Seville and the only thing we must focus on is that game."

Colombia striker Falcao, who is coveted by several of Europe's richest clubs, pulled up early in the second half clutching the back of his left leg and had to be replaced by Diego Costa.

The club said later on their Twitter feed he had damaged his hamstring but did not say how long he might be sidelined.

"He will rest and he will be in very good shape further down the line," Simeone said.

Jose Mourinho's Real side romped to a second victory of the week against Valencia after Tuesday's 2-0 Cup quarter-final first leg success at the Bernabeu and they return to the Mestalla for the second leg on Wednesday.

They will be on a high after tearing Valencia apart in the first half of Sunday's league game with a brilliant display of counter-attacking football that brought back memories of their superb form in winning the title last season.

Gonzalo Higuain opened the scoring in the ninth minute after a swift break and Ronaldo picked out Di Maria at the far post to make it 2-0 in the 34th minute.