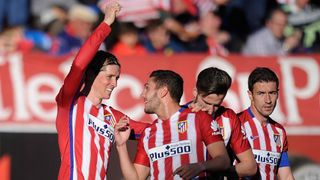 Atletico Madrid are only depending on themselves as they look to challenge Liga leaders Barcelona for the title, says Diego Simeone.

Atletico moved level with Barca at the summit on 76 points as their 3-0 victory over Granada preceded Luis Enrique's side suffering a 2-1 defeat – their third successive top-flight loss – at home to Valencia.

Simeone takes his team to San Mames to face Athletic Bilbao on Wednesday and insists they will look to win and not hope for another slip-up from the leaders.

"The only thing we are interested in is the match against Athletic. Like I always say, the important match is that of tomorrow," said the coach.

"It is key, as all matches have been. We are going to face a very strong rival in all departments – the presence of Raul [Garcia] has greatly strengthened them.

"I'm not a fortune teller, it is very difficult to guess what might happen [in the title race]. I am sure that we do not depend on anyone, we depend on ourselves.

"Outdoing ourselves is the first step, an objective was to surpass our performance last season and we are on our way to doing that."

Antoine Griezmann scored a hat-trick on his previous visit to San Mames in December 2014 when deployed as a central striker, rather than playing out wide.

That performance helped convince Simeone to use the Frenchman through the middle on a regular basis, a decision which has proved successful with the 25-year-old scoring 20 Liga goals this season.

"It was an important step in that match. We played with him as a centre-forward because we did not have [Mario] Mandzukic and he had a tremendous game," added the Argentinian.

"But that came from the work involved in the group and knowing what your coach needs. Everything that is happening is a credit to him.

"I am convinced that he still has room for improvement; hopefully he continues to demand as much from himself as he does."