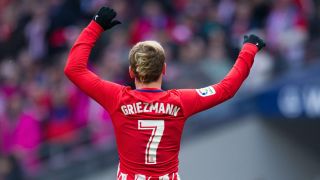 Antoine Griezmann set aside speculation over his future to star for Atletico Madrid, but his goal was only enough for a 1-1 LaLiga draw at home to Girona after the forward was surprisingly substituted with the match still in the balance.

France international Griezmann had been the subject of reports earlier on Saturday that suggested he and Barcelona had a secret pact for a transfer later this year, forcing the Catalan club to deny any agreement.

But such talk did not distract Atletico's star man as he broke the deadlock towards the end of a frustrating first half in which an exciting attacking home line-up had lacked fluency in the tight confines of the final third.

That strike still looked to be enough to secure victory but, with Diego Costa and Griezmann both having been substituted, Portu struck in the 73rd minute to snatch a point for Girona.

Diego Simeone's decision to withdraw his two forwards had not been a popular one for the home crowd and, after they had exited the stage, his side lacked the invention required to win the game by moving ahead for a second time.

Atleti consequently missed the opportunity to move to within six points of leaders Barca, and they could now lose second place to Valencia, who travel to Las Palmas later on Saturday.

Griezmann tested Bono with an early dipping strike and later flicked a cute pass into the area for Angel Correa to nip in ahead of Bernardo Espinosa and go to ground, but the felled forward's optimistic penalty appeals were waved away.

While Girona largely succeeded in keeping the hosts at arm's length in the opening half-hour, they still struggled to muster an answer to the evasive pair of Griezmann and Correa, who combined again to draw a smart stop from Bono at the end of a speedy break.

And, sure enough, after 34 minutes, Griezmann proved the difference.

Having kept a dwindling attack alive by prodding a loose ball back towards Thomas Partey, the 26-year-old timed his run to meet Costa's brave knockdown following the subsequent cross and lash into the net from eight yards out.

Portu could well have stolen a scarcely deserved equaliser in first-half stoppage time, but Jan Oblak pounced on his mishit close-range shot.

That scrappy passage of play was a signal of what was to come after the interval, with Atleti starting slowly and yet initially dealing comfortably with a blunt Girona front line.

Gorka Iraizoz, on for the injured Bono, blocked well when the hosts belatedly created their next clear opening - Yannick Carrasco failing to beat the goalkeeper having been played in by Saul Niguez.

Instead, however, the second goal arrived at the other end when Portu made no mistake with his second gilt-edged opportunity and poked Espinosa's header beyond Oblak.

Atleti looked to rally again, but Griezmann's absence was keenly felt as Girona matched the title challengers in the closing stages and held on for a point.

There was even a further late scare for Simeone's side as Oblak took down Michael Olunga outside his area in the dying seconds and was punished only with a yellow card and a free-kick on a disappointing afternoon for the hosts.