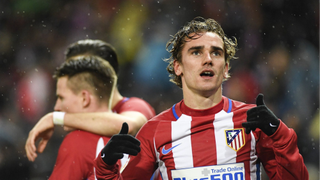 Atletico Madrid twice came from behind as Yannick Carrasco and Antoine Griezmann inspired a last-gasp show to secure a thrilling 3-2 win over Celta Vigo on Sunday.

Diego Simeone's men appeared to have lost all belief when John Guidetti netted 12 minutes from time to punish Fernando Torres' first-half penalty miss, but Carrasco hit a sweet volley and then the previously anonymous Griezmann was decisive when it really mattered, as Atletico bounced back from their Copa del Rey semi-final defeat to Barcelona to jump back into the top four in LaLiga.

Proceedings were frantic throughout the first half and both sides scored early on – Celta taking the lead as Gustavo Cabral pounced on a goalkeeping error, before an acrobatic Torres levelled with one of the goals of the season.

Atletico should have scored a second from the spot, only for Torres to join Griezmann and Kevin Gameiro in missing from 12 yards inside the last week.

The second half was more fraught and Atletico appeared to have been made to rue Torres' penalty failure when Guidetti capped off a devastating Celta breakaway, but the hosts came up trumps.

Carrasco levelled in style and then Griezmann finished off a brilliant move - scoring with his one and only touch in the Celta box - in the 88th minute to stun the visitors and rescue victory from the jaws of defeat.

1 - Antoine Griezmann scored with his only shot and in his only touch in the opposite box in this game. Crucial. February 12, 2017

The match was only six minutes old when Celta opened the scoring with a little help from Miguel Angel Moya, who punched a left-wing corner straight to Cabral and he headed in.

But Atletico swiftly responded in style.

Torres' first touch saw the ball sit up nicely after receiving a pass in the area and, with his back to goal, he looped an audacious half-volley over his head and into the top-right corner.

Referee Jose Hernandez failed to award a penalty for Facundo Roncaglia's rash tackle on Torres, but was more obliging just before the half-hour mark as Carrasco went down under minimal contact.

However, Torres smashed the resulting spot-kick against the crossbar in the hosts' latest blunder from 12 yards.

A hamstring injury forced Simeone into replacing Juanfran with Sime Vrsaljko at half-time.

Celta's willingness to sit back more after the break meant the Croatian was rarely tested, though, as Atletico did all of the attacking, without creating anything clear cut.

The away side gradually began to look more and more lively on the break and Guidetti blazed a fine chance over the bar before making no mistake with his next opportunity a minute later, tucking into the bottom-left corner from the edge of the box after Daniel Wass' squared pass.

With 12 minutes to find a response, Atletico's was extraordinary.

Carrasco restored parity in the 86th minute with a wonderful 25-yard volley after Celta cleared a corner and then Griezmann completed a remarkable turnaround a few moments later - emphatically finding the net from close range after Gameiro nodded a cross down to his compatriot.

Gameiro should have scored himself in the second minute of stoppage time when hitting the frame of the goal from close range, but little did it matter, as Atletico held on to regain fourth place at Real Sociedad's expense.

- Atletico have scored more goals from outside the box than any other side in La Liga this season (nine).
- Fernando Torres has scored three goals in his last three games, as many as he did in the whole of 2016/17 (three in 23 apps - all competitions).
- Antoine Griezmann has scored in each of his last four appearances against Celta in La Liga (five goals).
- Atletico have conceded 18 goals in La Liga 2016/17, as many as they conceded in the whole of last season (18).
- Atletico have missed more penalties than any other La Liga side this season in all competitions (33% of penalty conversion rate - six from nine).
- No other current La Liga player has missed more penalties than Fernando Torres in the competition (9 from 28 (67.8% penalty shot conversion) - level with Cristiano Ronaldo (9/65)).