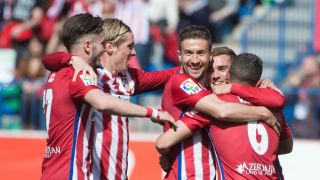 Atletico Madrid applied pressure on Barcelona ahead of El Clasico as a 5-1 victory over Real Betis saw them move to within six points of the Liga leaders.

The pair struck late in the first half to put Atleti ahead at Vicente Calderon, Torres netting with a smart finish before Griezmann enjoyed a stroke of good luck as Betis goalkeeper Adan allowed his throughball to go all the way in.

After Jan Oblak had made a fine double save to deny Heiko Westermann, Atleti resumed their control and saw Griezmann denied again before Juanfran added the third just after the hour.

Ruben Castro gave Betis some consolation with a late strike but Griezmann and Thomas Partey completed a ninth victory in Atleti's last 11 home games, while the visitors continue to look nervously over their shoulder towards the bottom three.

Atletico started brightly and saw Adan in fine form, the keeper twice coming to Betis' rescue as he first tipped over Saul Niguez's header before parrying Griezmann's cross – the keeper watching with relief as Koke's follow-up then looped over the bar.

Despite the hosts' lively start Betis then enjoyed a period of possession, but they failed to take advantage and Torres sparked Atletico into life after 37 minutes.

The former Chelsea and Liverpool striker raced in behind the Betis defence to meet a sublime pass from Koke before coolly lifting the ball over the onrushing Adan.

Five minutes later Atleti doubled their advantage as Adan's error gifted Griezmann his 18th of the season, the keeper misjudging the France international's chipped pass and allowing the ball under his body.

He went some way to atoning for his mistake in the closing minutes of the half, though, as Diego Simeone's men finished strongly, the 28-year-old denying Torres and Griezmann with two fine reflex saves.

Betis should have halved their deficit in the opening minutes of the second half but were denied by a stunning save from Oblak, the keeper getting down well to push Westermann's header onto the post before smothering the rebound.

Atletico's third came from the unlikely source of Juanfran, the full-back ghosting in at the back post to meet Angel Correa's pass and, after controlling the ball on his chest, he fired home his first league goal since May 2013.

Oblak's hopes of a clean sheet were ruined with 11 minutes to play as Betis grabbed a late consolation, Castro firing home his 16th of the season from close range.

Atleti were not to be denied a deservedly comfortable winning margin, though, as Griezmann added his second after 82 minutes following excellent work from Correa.

And Partey rounded off an emphatic victory with a stoppage time tap-in, giving Atleti the perfect preparation for their Champions League quarter-final first leg with Barca on Tuesday.