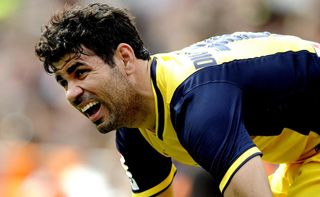 Costa has netted 35 goals in all competitions this season as La Liga leaders and UEFA Champions League semi-finalists Atletico remain on track for glory both at home and abroad.

The 25-year-old's blistering form has sparked speculation over a possible move away from Vicente Calderon - with Atletico's opponents in the Champions League last four, Chelsea, among those reportedly interested - but Caminero claims the club want to keep hold of their talisman.

"Last year we wanted to consolidate the group of players that we currently have," he said in an interview with Movistar.

"We renewed the contracts of pretty much all of them, including Diego Costa.

"Our minds are set on keeping this group of players together and steadily bring in one or two more, who can reinforce what we're doing with our project.

"We want all our big players to stay and we're planning for next season with him."