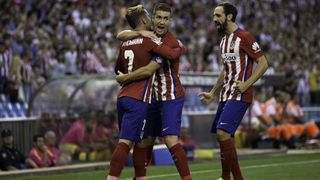 Atletico Madrid captain Gabi is relishing being involved in another Liga title tussle with Barcelona as Diego Simeone's table-toppers prepare for the visit of Sevilla.

The 2014 champions have lost just three of their opening 20 league matches and bounced back from December's 1-0 defeat to Malaga by winning the next four games without conceding.

That form has kept them in the thick of the battle for the championship and Gabi is enjoying the ride.

"We're where we want to be," he said, speaking after Atletico's 0-0 Copa del Rey draw with Celta Vigo.

"It's great for all of us to be fighting with Barcelona, to be practically level on points. We're where we want to be and we'll see where we're able to end up."

Atletico were convincing 3-0 winners at the Ramon Sanchez Pizjuan in August, when Gabi was on target, but Sevilla have enjoyed a strong run of form since their 2-1 loss to Granada on January 3.

An emphatic 6-0 triumph over two legs against Real Betis in the Copa del Rey has accompanied victories over Athletic Bilbao and Malaga in La Liga, which has kept Unai Emery's side in touch with the top six.

Emery accepts his side face a tough ask if they are to end a run of 12 games without a win over Atletico, but is nonetheless looking forward to the challenge.

"It's a new opportunity and opportunities are there to be taken," he said, speaking after a hard-fought Copa win over Mirandes. "We'll work diligently for the game so we can go home successful.

"They are very tough but that's our challenge and our job."

Oliver Torres (groin) and Lucas Fernandez (back) were forced to train separately from this week as they continue their recovery and remain doubtful. Fernando Torres – reportedly in talks over a new contract – continues to battle an ankle injury, with Saul Niguez (illness) hoping to be fit, but Tiago (broken leg) remains out.

Emery said this week he could restore Fernando Llorente to the attack as he looks to mastermind only a third win for Sevilla in 22 Liga trips to face sides from the Spanish capital.

Vicente Iborra is suspended after his red card against Malaga, but Sebastian Cristoforo – who has enjoyed a promising run of games recently – could return after being rested in midweek.

- Sevilla have not won a league game since September 2008 at Vicente Calderon (0-1, D3 L3 since).
- Atletico are, alongside Malaga, the Liga side with the fewest goals conceded at home this season - five (0.55 per game).
- Only one of the last nine Atletico goals in La Liga have come in the first half of games.
- Indeed, Simeone's side have scored 43 per cent of their goals in the last 15 minutes of games, the highest rate in the top flight.