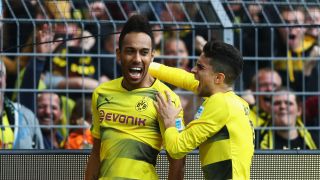 Bayern preceded their title-winning party by dispatching Freiburg 4-1, but Poland star Lewandowski was unable to add to his haul of 30 top-flight goals this term and claim the individual trophy for a third time in four seasons.

That cleared the way for Aubameyang to leapfrog him with a goal in each half during Dortmund's thrilling 4-3 victory at home to Werder Bremen.

Thomas Tuchel's side were twice behind, knowing they needed to match Hoffenheim's goalless draw against Augsburg to secure third place and automatic entry into the group stages of next season's Champions League.

It fell to Aubameyang to make sure of their progress when he dispatched Dortmund's second penalty of the second half with a minute of normal time remaining.

Aubameyang ends the campaign on 31 goals at an average of one every 90 minutes, with Lewandowski a shade over at 93 minutes per goal for his 30.

Cologne striker Anthony Modeste finished third in the standings on 25 goals, despite drawing a blank in his side's 2-0 win over Mainz, while RB Leipzig hitman Timo Werner  concluded a breakout campaign with 21 to his name.