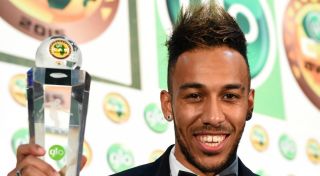 Pierre-Emerick Aubameyang was honoured to take out the CAF Player of the Year award after a stunning year of form with Bundesliga outfit Borussia Dortmund.

Aubameyang has long been touted as one of the leading talents to come out of Africa in recent times and he has delivered on that reputation with some remarkable form, taking out the CAF top gong, ending a four-year run of wins from Manchester City's Yaya Toure.

The Gabon international has already scored 27 goals this season, and said he was proud to have won the award.

"When you're next to players like Yaya Toure and Andre Ayew, you are proud to win this trophy in front of them because they are great players that I admire a lot," Aubameyang said.

The forward said he is capable of winning it again next year if he can continue to work hard.

"But I have the qualities to be there again next year. But it is hard work and sacrifice too."