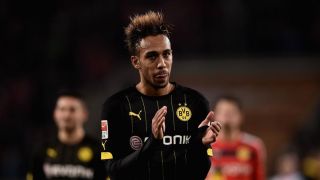 Pierre-Emerick Aubameyang has reiterated his commitment to Borussia Dortmund as rumours of a move away from the club persist.

Gabon striker Aubameyang has been in sensational form for Dortmund this season and has scored 18 goals in 17 Bundesliga appearances.

Aubameyang's performances were recognised as he won the CAF Player of the Year award on Thursday, preventing Yaya Toure from winning for a record fifth time.

And his goals have also led to interest from elsewhere, with Premier League side Arsenal heavily linked with a move.

But Aubameyang used his acceptance speech at the CAF awards to once again stress his desire to stay at Signal Iduna Park, as he stated: "I will stay at Dortmund."

Aubameyang is in his third season at Dortmund having joined from Saint-Etienne ahead of the 2013-14 campaign.