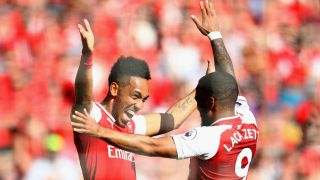 Alexandre Lacazette insists he sees Pierre-Emerick Aubameyang as a friend rather than a rival despite losing his place in the Arsenal team to the Gabon striker in the second half of last season.

Lacazette became Arsenal's record signing in July last year when they paid Lyon €53million for him, with the striker initially appearing to settle quite well, scoring four in his first six Premier League games.

But his performances did not continue to improve and the goals dried up, resulting in the Gunners breaking their transfer record again to sign Aubameyang for a reported €64m in January.

Aubameyang instantly usurped Lacazette in the starting XI, scoring 10 times in 13 league games before the end of the season – the French forward lining up just four times between the start of February and the campaign's conclusion.

But Lacazette is adamant he has never felt as though he is in direct competition with Aubameyang.

"I never said it was bad for me," Lacazette, who scored twice in a 5-1 friendly victory over Paris Saint Germain on Saturday, said.

A strong outing for these four But who impressed you the most? July 28, 2018

"Only people in the press said it was bad. I was happy because I knew I could play with him.

"I didn't see him as a rival more than a team-mate, so since the beginning I was happy about his signing."

Although Lacazette managed to score 14 times in the Premier League last term, many of those goals came in bursts, meaning he endured some barren runs.

But he now feels better prepared for the difficulties of English football.

"Sometimes you can do everything, but it's only about a little bit of luck," he said. "It has finished. Last season is in the past.

"When I didn't score, of course I was frustrated, but I've learned and now I am happy to start a new campaign.

"I'm more ready. The difference is in the power. Defenders in general are stronger than in France. Referees are less strict. Teams like to play deep and counter more."