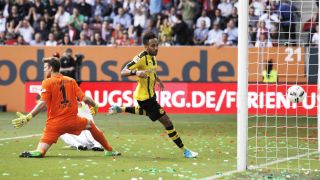 Borussia Dortmund's grip on an automatic Champions League place loosened a little on Saturday as they were held to a 1-1 draw by Augsburg in the Bundesliga.

Thomas Tuchel's side needed Pierre-Emerick Aubameyang to rescue a point at the WWK Arena, the Gabon international cancelling out Alfred Finnbogason's opener.

However, with Hoffenheim beating Werder Bremen 5-3 the two sides are now level on 61 points with one game remaining - Dortmund needing to hold onto third to secure a safe passage into the group stages of next season's Champions League.

Finnbogason had handed Augsburg the lead when he tapped home from a rebound, but Aubameyang salvaged a draw for BVB with a clever finish from close range just minutes later.

Dortmund's preparation for the game was somewhat marred by reports of a rift between Tuchel and CEO Hans-Joachim Watzke, with the head coach even suggesting during a news conference on Friday he could be on the move come the end of the season.

Tuchel stressed his focus lies on ending the 2016-17 campaign on a high for now, though, and that is only confirmed by Saturday's stalemate.

BVB host Bremen next week in their final league game, while Hoffenheim have a home game against Augsburg in store.

Manuel Baum's Augsburg, meanwhile, defend a two-point lead over 16th-placed Hamburg in the battle against relegation with a superior goal difference, with Mainz and Wolfsburg not safe yet either.

Augsburg made an encouraging start to the game and perhaps should gone a goal up when Philipp Max presented Finnbogason with a gilt-edged chance to open the scoring in the 17th minute, only for BVB goalkeeper Roman Burki to deny the Iceland international with a sublime save.

There was no denying Finnbogason just before the half hour, though, as the attacker tapped home from close rebound after Burki failed to deal adequately with Max's low shot from the left side of the area following a long ball from shot stopper Andreas Luthe.

However, they were not in front for long as Aubameyang restored parity just four minutes later with his 29th goal of the Bundesliga campaign. Shinji Kagawa tried his luck from just outside the box after some poor defending from Augsburg and the Gabon international cleverly directed the ball past the helpless Luthe.

Aubameyang continued to cause the Augsburg defence all kinds of trouble after the break and he nearly handed BVB the lead with an opportunistic volley that eventually sailed just over the target.

The former AC Milan youngster was then unfortunate to be denied a second goal by Luthe shortly after, the Augsburg goalkeeper reacting superbly to palm his strong header wide for a corner.

Kagawa could have won it for the visitors with 14 minutes left on the clock, but Luthe once more showed his class to keep out the midfielder's header from a narrow angle as it ended all square.