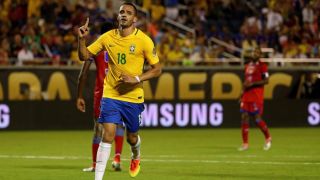 Renato Augusto and Wallace have been called up by Brazil ahead of the Rio Olympics.

The duo were announced as part of the 18-man squad, which is headlined by Barcelona star Neymar, on Thursday.

They replace Douglas Costa, the Bayern Munich attacker who has withdrawn due to injury, and Shakhtar Donetsk's Fred.

Augusto, Neymar and 38-year-old goalkeeper Fernando Prass are the three overage players in the squad.

Brazil are looking to win a first ever gold medal in men's Olympic football and will face South Africa, Iraq and Denmark in Group A.