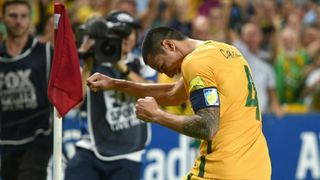 Australia progressed to the third round of AFC World Cup qualifying as Group B winners thanks to a 5-1 demolition of Jordan on Tuesday.

Record goalscorer Tim Cahill netted a first-half brace either side of Aaron Mooy streaming through a vacant defence on the counter attack to score, ruling out any prospect of the victory Jordan needed to usurp Australia at the top of the standings.

Any words of wisdom imparted by Jordan boss Harry Redknapp at the interval had little impact as his players continued to struggle, Robbie Kruse marking his return to the Australia starting line-up in impressive style as Tom Rogic and Massimo Luongo also hit the back of the net.

Abdallah Deeb Salim got Jordan on the scoresheet in injury time, by which point their 2-0 win over Australia in Amman earlier in qualifying was a fading memory.

Ange Postecoglou's men were brimming with confidence following last week's 7-0 victory over Tajikistan and soon set about inflicting another rout.

The combination play between Kruse and Mooy tormented Jordan throughout, and the duo linked up for Mathew Leckie to head over in the 13th minute.

Jordan goalkeeper Amer Shafi got down sharply to his right to keep out a Rogic drive and the visitors wasted a 23rd-minute opening when Hamza Al Dardour sprung the offside trap.

It was a miss they would soon regret when Mooy slid a pass to Kruse and the Bayer Leverksen playmaker – back at the venue where he suffered ankle ligament damage in last year's Asian Cup final – picked out Cahill for a simple finish.

Kruse drew a backpedaling Jordan defence into disarray before playing in Mooy for a composed 39th-minute finish and a misjudgement from Shafi allowed Cahill to head the third a minute from half-time.

The punishment continued in the second half, with Rogic making a timely run into the box to collect a blocked Cahill effort and slot home.

Substitute Luongo got on the end of Chris Ikonomidis' 69th-minute cross and Jordan were indebted to Shafi for preventing a further humiliation, while Yousef Al Rawashdeh was booked for a horrific lunge on Kruse that underlined the visitors' frustration.

Shafi saved twice from Rogic and thwarted Trent Sainsbury and Cahill before Abdallah struck a fine consolation from outside the box.

Cahill had one more punt at claiming the matchball, with substitute Baha Faisal impressively clearing off the line, and Postecoglou's rampant side will know far tougher tasks lie ahead.