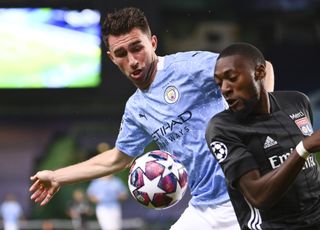 Manchester City defender Aymeric Laporte admits crashing out of the Champions League after yet more VAR controversy is tough to take.

City suffered at the hands of the officials for a second successive year in the competition as they were beaten 3-1 by Lyon in their quarter-final in Lisbon on Saturday.

This time neither referee Danny Makkelie nor VAR saw reason to disallow a crucial Moussa Dembele strike 11 minutes from time at the Jose Alvalade Stadium despite a possible foul on Laporte in the build-up.

Laporte tweeted: “Just to be clear: I will not hide, I’m a football player but a man foremost, we all made mistakes in this game, and I also take my responsibility for the bad team performance.

“But this decision is hard to accept, especially in a crucial qualifier AND with the help of VAR.”

Adding to the controversy, Dembele had also been in an offside position earlier in the move. The goal put Lyon back ahead against the run of play, with City threatening to take command after Kevin De Bruyne had cancelled out Maxwel Cornet’s early strike in the 69th minute.

They could still have taken the tie to extra time but Raheem Sterling remarkably missed an open goal from five yards after being set up by Gabriel Jesus on 86 minutes.

Dembele, who had only come off the bench on 75 minutes, then ensured Lyon would complete the semi-final line-up at the mini-tournament in Portugal by pouncing late on after Ederson spilled a Houssem Aouar shot.

The defeat marked yet more Champions League frustration for City and their manager Pep Guardiola.

In nine successive appearances in the competition, City’s best showing remains the semi-final they reached under Manuel Pellegrini in 2016. With Guardiola in charge City have gone out in the last 16 in 2017 and at the quarter-finals for the last three years.

It remains a puzzle why City cannot transfer their domestic dominance of recent years onto the European stage. Questions will certainly be asked of Guardiola, who after masterminding a stunning defeat of Spanish champions Real Madrid, switched to a three-man defence to try to counter the side that finished seventh in Ligue 1.

Disappointing and painful night in Lisbon. Life sometimes can be cruel, and football isn’t different. But now is time to get little rest and get ready for the next season.— Fernandinho (@fernandinho) August 15, 2020

The resulting disjointed performance allowed an organised Lyon side to soak up pressure and hit on the break with the pace of Cornet – who has now scored four goals in three games against City in the last two years – and Aouar.

Guardiola insisted City would regroup for another attempt next season.

He said: “We will recover, we will restart it again and try to do it again.

“I think with what these guys have done we deserve to do it again, or to go through and reach the semi-finals. Life is how you stand up again and next season we’re going to try again.”

Midfielder Fernandinho added on Twitter: “Disappointing and painful night in Lisbon. Life sometimes can be cruel, and football isn’t different.

“But now is time to get little rest and get ready for the next season. And it will be very different.”