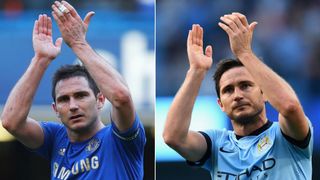 Now at Manchester City, Lampard will return to Stamford Bridge for the first time on Saturday as the Premier League's top two sides meet in a crucial encounter in west London.

The reverse fixture back in September saw Lampard come off the bench to score a late equaliser in a 1-1 draw, a goal he barely celebrated against his former club.

And Azpilicueta, who played alongside Lampard for two years before the midfielder's departure, believes it will be strange to see a man synonymous with Chelsea line up for the opposition.

"In the history of the club Lampard is a Chelsea legend and obviously it will be weird to see him playing in another shirt," he told Sky Sports.

"He will get a reception of a legend at Stamford Bridge. But he's professional and when he’s on the pitch he will try to win for his team.

"The game at the Etihad was really tight. We scored when they had 10 men and were winning 1-0. They pushed a lot and we couldn’t manage the pressure from them and Lampard arrived to score the equaliser.

"Games against City are always tough and very tight, and this is a big game in the league.

"We know we have to win every game, every week, at home and away, so it is important because we play against a big team.

"A lot of things can happen between now and the end of the season."