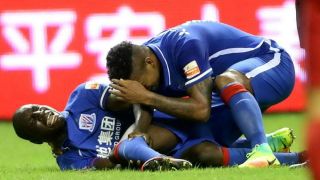 Demba Ba is targeting a return for the start of the next Chinese Super League season in March following his horrific leg injury, according to the player's agent.

Shanghai Shenhua striker Ba suffered a broken leg in the second half of the Shanghai derby on Sunday, going down under the challenge of SIPG defender Sun Xiang.

Ba, 31, has already insisted the injury will not force him into retirement and agent Alex Gontran says his client is focused on being ready to start the 2017 CSL campaign.

"Demba feels better now," Gontran told Goal.com. "He's already been through something like that, as he fractured his tibia 10 years ago.

"He's not worried now, he just needs time to come back stronger than ever.

"He'll undergo surgery under a French doctor on Friday morning. We all hope he'll be able to start the next season with Shanghai Shenhua in March.

"The club is doing everything it can to ensure Demba is properly taken care of and we're grateful to them for it.

"Demba is strong as a rock. Life has many ways of testing someone's will. God will help Demba to find strength to come back to the field."

Former Chelsea forward Ba had been in great form for Shenhua - who defeated SIPG 2-1 - this season, scoring 14 goals in 18 appearances.