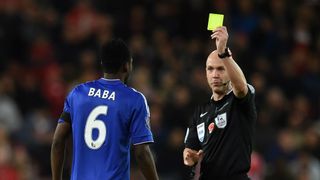 Chelsea full-back Baba Rahman has voiced his frustration at a lack of playing time since joining from Augsburg.

The Ghana international joined Chelsea from the Bundesliga in August 2015, but has so far been unable to secure regular first-team action at Stamford Bridge.

Rahman, 21, has made just four Premier League appearances so far and is determined to get more action in the second half of the season.

"Of course it is frustrating for any footballer to be forced to watch from the stands," Baba told Sport Bild.

"I do not want to experience that any longer.

"You have to get used to the Premier League and a big club like Chelsea first when you are a young player like I am, so the first half of the season was alright.

"But I definitely want more playing time in the second half of the season."

The left-back was brought in by Jose Mourinho, who has since been replaced as manager by Guus Hiddink, and he has nothing but fond memories of his former boss.

"He always gave me tips on how to improve both defensively and going forward," Rahman added.

"I liked him right from the first moment. Every player would benefit from working with him."