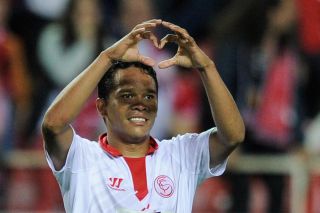 The striker netted the second goal of the match on Thursday to give Unai Emery's men a glimpse of next month's final in Turin, but Bacca is only concentrating on the return leg next week.

Stephane M'Bia opened the scoring at the Estadio Ramon Sanchez Pizjuan despite being in an offside position, before Bacca doubled the lead with a low finish.

Valencia came from three goals down in their quarter-final against Basel to progress and the Colombian striker knows they still have a big challenge to reach the final.

"We played a good match against a great rival like Valencia," Bacca said.

"It's still not going to be easy to get a result over there. One of the most important things was to not concede a goal tonight.

"We could have scored the third but they played very well too.

Sevilla could have won by more in the first leg had Valencia goalkeeper Vicente Guaita not saved from Federico Fazio and Bacca on a number of occasions.

Valencia nearly pulled a goal back in the latter stages, though, only for Eduardo Vargas' shot to strike the crossbar.