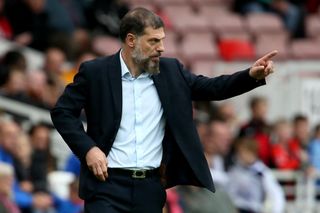 Slaven Bilic is loving being at the top of the Sky Bet Championship table with West Brom – where they stayed after beating Middlesbrough 1-0 at the Riverside Stadium.

Substitute Hal Robson-Kanu struck his first goal of the season with eight minutes remaining and that proved enough to separate the two teams on Teesside.

It was a victory that was a little harsh on Middlesbrough, who created plenty of good chances and forced Baggies goalkeeper Sam Johnstone into numerous saves.

But West Brom got the job done to climb two points clear of second-placed Leeds, leaving deflated Middlesbrough just a point above the relegation zone after winning just two of their opening 12 matches under head coach Jonathan Woodgate.

Bilic, whose side have lost just once under him, said: “It is pressure up there. Of course, it is a positive pressure. That is why we played, trained, from the end of June. That’s why, to try to win games.

“The more you win the closer you will be to the top of the table and that adds to the pressure. This is a totally different pressure to fighting for your life…this is enjoyable. Definitely.

“Middlesbrough are there at the moment. I strongly believe in them having two legends of the pitch in Jonathan and Robbie (Keane, assistant manager), they are warriors. They have done everything in their life. They have a good team.

“Middlesbrough are not confident and what they need is a couple of wins. That’s not easy. They are fighting hard and they gave us a hard game. If they continue then they will be out of trouble very soon and I have no doubt they will do it.

“Make no mistake, we knew what kind of game we expected and it was the one we didn’t want. We were ready for that. They defended in numbers but with more quality and quantity of attacks, then sooner or later you will get good opportunities. That is exactly what happened.”

Woodgate was far happier with his side’s performance than he was with the manner in which they lost at Birmingham before the international break. He changed the system to suit his midfielders and it almost paid off.

The Boro boss, whose side face Huddersfield on Wednesday, said: “I thought we played really well. I thought we created the best chances. Their keeper played well. I can’t remember a save Darren (Randolph) had to make really.

“OK, they dominated possession but they’re a really good team who will go up this season. We created the best chances of the game but failed to put it in the back of the net.

“What I’ve said to the players in the dressing room is ‘keep your heads up. Stay positive, like I am, because if we play like that we will win games of football. No chins on the floor. I want to see you all upbeat and we go again tomorrow’.

“It’s difficult but you’ve got to stay positive. I’m the manager and will remain positive. If you play like that, we will win games.”