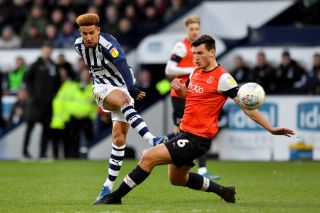 The 24-year-old set up Albion’s first goal when his cross was turned in by Donervon Daniels in the 14th minute before Seyi Ajayi headed home 20 minutes from time as the Baggies returned to the top of the Championship with a 2-0 win.

“He did extremely well for his first game especially,” said Bilic.

“He’s a player who we wanted in the summer. He wanted to come but he opted for a Premier League move which is normal.

“When we heard about the possibility (he might be available), we acted straight away because there were other clubs who found out, but it was too late.

“He’s a player we wanted because he can attack space, he’s a winger and a striker so he’s always in the box, which is what you want, and he’s also moving when other people are on the ball.

“Also when he’s one-on-one with the ball at his feet, he’s a really good player.”

Bilic revealed his team went back to basics after seven games without a win.

“Recent results affect every team in the world, even Real Madrid,” he said.

“So we went back to basics, or if not, we were doing those (basic) things.

“It was planned. We were doing that for the whole game – we were great on the second balls and we were great at defending and stopping them.”

Luton manager Graeme Jones felt his side should have had a penalty when Pelly-Ruddock Mpanzu tumbled under challenge from Ajayi.

“From where I was it was a penalty – he loves one-on-one duels and I’ve never seen him dive in his life,” said Jones.

“I thought it was a penalty and then Callum McManaman had a chance but maybe it came too quickly for him after he came on.

“But you’ve got to take those chances at a place like this, just to turn the crowd, so it gets a bit nervy in the ground.”

Luton remain bottom, seven points from the safety, after their 11th straight away league defeat, but Jones feels they are getting closer to turning their away form around.

“I think we added to our development from Nottingham Forest (when Luton lost 3-1),” he said.

“We went to the third-placed team and now we’ve gone to the second-placed team who have now gone top and I don’t think we were fazed.”