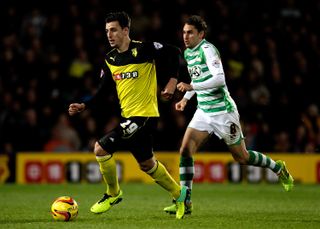 The 21-year-old, who will join a County side fourth in the Championship, has also agreed a new three-and-a-half-year contract at The Hawthorns.

Thorne came through the youth system at West Brom and has been loaned out to the likes of Portsmouth, Peterborough United and Watford previously with the Premier League side having no right to recall Thorne this season.

West Brom's sporting and technical director Richard Garlick said the time was right, given the recent appointment of Pepe Mel as coach, to allow Thorne to leave the club temporarily.

"George has worked really hard to get back from the injury he suffered this time last year at Everton and we feel he deserves this new deal," Garlick told the club's official website.

"With George coming back from long-term injury, and the arrival of a new head coach making it difficult to break into the first team, we decided to secure him a loan move to Derby, so he can get game time at a really good club, who are at a good level and play football the way we like."

Derby head coach Steve McClaren added his delighted at being able to secure Thorne, who has represented England at all levels between under-16 and under-19.

"George is a promising young player and we’re pleased he will be with us for the rest of the season," McClaren told Derby's official website.

Derby have also confirmed that goalkeeper Saul Deeney has had his contract mutually terminated while Championship rivals Sheffield Wednesday have bolstered their forward line with the loan signing of Arsenal's Benik Afobe.

Wednesday saw Connor Wickham recalled from his loan spell at Sunderland, but are thought to remain in the hunt to bring the England under-21 international back to Hillsbrough.