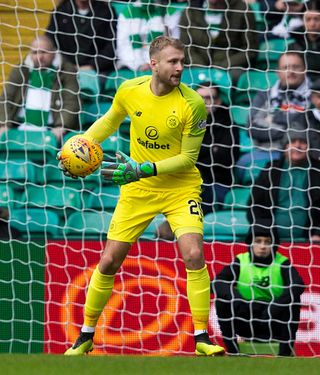 Celtic keeper Scott Bain now has the incentive to nail down the number one spot for club and country, according to Hoops interim boss Neil Lennon.

Rangers number one Allan McGregor announced he was quitting international football before Alex McLeish named his Scotland squad for the Euro 2020 qualifiers against Kazakhstan and San Marino next week.

Bain, 27, who took over as Hoops number one from Craig Gordon at the start of the year, was included in the squad along with Jordan Archer and Jon McLaughlin, all of whom have been capped once.

Lennon, when boss at Hibernian, took Bain on loan from Dundee in the January 2018 transfer window but allowed him to move to Celtic the same month as a back-up after an injury to Gordon, and he subsequently signed a four-year contract with the Parkhead club in May, 2018.

Ahead of the Ladbrokes Premiership clash with Dundee at Dens Park on Sunday, the Northern Irishman said: “I think he probably will be number one for Scotland.

“I’m not trying to tell Big Eck (McLeish) how to do his job but he has been in superb form.

“I know him very well. I had him at Hibs for a brief time so I am a big fan of his.

“The improvement in him since he has come here has been huge. He has really filled into the jersey and he has been exceptionally good and I will be delighted if he is number one. I’m sure he won’t let anybody down.

“It has been meteoric, the last year or so for him. There is nice composure about him, he has got good hands, a good agility and he’s certainly playing very well for me.”

Lennon revealed that Gordon may require more treatment on a knee injury which has been caused by over-training since he was replaced by Bain.

“He had a bit of a knee problem,” said the former Celtic captain and manager, who has midfielders Callum McGregor and Olivier Ntcham and defender Filip Benkovic available for the trip to Tayside.

“He had an injection in it and it hasn’t really settled.

“He is going to be assessed by specialists over the next couple of days and we can come to some sort of impasse where he may need another injection to settle everything down to get him back to training.