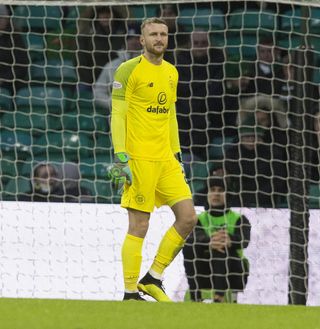 Scott Bain believes Celtic will recalibrate their season with back-to-back victories over Hearts.

The Hoops came in for some criticism following their dismal display in the 2-0 defeat by Old Firm rivals Rangers at Ibrox last week despite having already clinched their eighth successive Ladbrokes Premiership title.

And after the final league game against Hearts on Sunday, where they will be presented with the trophy, they get the chance to win an unprecedented triple treble when they face the Jambos in the William Hill Scottish Cup final at Hampden Park on May 25.

Bain believes a couple of wins to end the season would wipe away the Ibrox defeat.

The 27-year-old Scotland keeper said: “We always want to put on a good performance and last week we didn’t perform to the standard we have done before.

“But you need to look at the perspective, that this is a team that’s won another league and are going on to play in the Scottish Cup final.

“It is a team that has won eight titles in a row and are going for another treble.

“To lose one game – it’s a massive game – but there can be a misrepresentation of things overall.

“It will be good to go on and hopefully win the next two games and put it back into perspective.”

Bain believes the passage of time will add further weight to the club’s current success.

The former Dundee player said: “The lads are achieving things that have never been done before.

“A lot of fans are just seeing success and success.

“There’ll be a time in the future when things aren’t going so well where people will look back on what’s been achieved and see how remarkable it is. It will probably never be done again.

“Hopefully we can take one more step and create a bit of history and hopefully everyone can appreciate it and enjoy it.”

Bain, who joined the Parkhead club in January 2018, took over the number one spot from Craig Gordon at the start of the year and admits this is easily the best season of his career.

He will also feel more part of the celebrations on Sunday than he did last season when they picked up trophy number seven after the 1-0 defeat to Aberdeen at Celtic Park.

He said: “I had a little taste for it last season but it means a little more to me now that I’ve been able to contribute more to the team this year

“You celebrate with the boys but in the back of your mind, you just know that you contributed a little, whereas this season I know I have contributed a lot more.

“It’s a great day for the players, family and all the supporters so looking forward to it.”