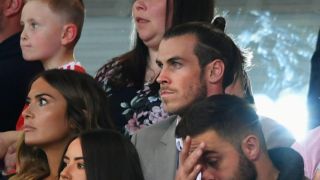 Gareth Bale has urged Chris Coleman to stay on as Wales manager despite the team suffering World Cup heartache.

The sidelined Real Madrid star was forced to watch on in anguish from the stands in Cardiff on Monday as James McClean's goal gave the Republic of Ireland a 1-0 that sealed a play-off spot at Wales' expense.

It means Coleman, Bale and company will not have the chance to try and emulate their heroic run to the semi-finals of Euro 2016 on a bigger stage in Russia next year.

Coleman said he was unable to give an answer one way or another on his future after the match but Bale hopes the 47-year-old continues beyond the end of his contract, which expires in November.

"Of course we want him to stay," he told reporters. "What he has done for the team and Welsh football has been amazing.

"He couldn't have taken on the job at a more difficult time and what we've collectively achieved since then has been amazing.

"We don't want to keep on looking back at the Euros, but for everyone it was incredible to be a part of that and we all want that again.

"It won't be easy but Chris is the man who can keep us focused and positive and show us how to get the results we need."