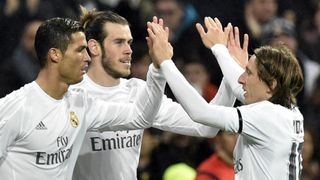 Luka Modric believes Real Madrid team-mate Gareth Bale has what it takes to win the FIFA Ballon d'Or in the future.

The Wales international had to settle for 16th place in this year's edition of the prestigious individual award and also missed out on a place in the FIFPro World XI.

However, Modric has little doubt Bale will make it to the Ballon d'Or ceremony at some stage.

"I told him that if he keeps playing like this then I do not see any reason why he can't make it into the World XI and then go on to win the Ballon d'Or," Modric was quoted as saying by The Telegraph.

"He has all the possibilities. He is a great player. Powerful, quality, everything. I hope in the future he will be there."

This year's FIFPro World XI consisted of eight players from La Liga as well as one apiece from Serie A, the Bundesliga and Ligue 1 as the Premier League stars were snubbed. Modric believes England's top flight is no longer the promised land.

"When you look at the world XI, it seems there has been a shift in power," he added.

"The best players are now playing in Spain. England has so many great players but La Liga is now number one.

"It is probably a little bit of everything really, the weather, the glamour, those two clubs.

"Barcelona and Real Madrid are the best in the world and that certainly helps."