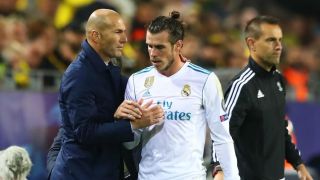 Gareth Bale's persistent injury problems are showing no signs improvement after Zinedine Zidane confirmed he will miss Tuesday's clash with Tottenham and could even miss the trip to Wembley on November 1.

The Wales international has endured an injury-hit start to the season and has not played for club or country since September 26 due to a calf problem.

When he could make his Madrid return remains unclear with Zidane unable to pinpoint a fixture in which he might feature.

Zidane has even accepted that playing against his former team at Wembley at the start of next month is by no means a certainty for Bale.

"I can't tell you the date for Bale," Zidane told reporters. "We have to wait and see.

"We know that each day is a day less – he wants to get back quickly of course.

"But on Gareth I can't say if he'll be back in the return game or not. I hope he is, but I can't assure you of anything."

Tottenham manager Mauricio Pochettino recently sang the praises of Sergio Ramos, saying he would pay to watch the defender play, and Zidane was similarly glowing of the Spain international.

"I could spend an hour talking about Sergio," Zidane added. "He's our captain, leader, but also off the pitch he is a leader, that's what I want to underline.

"He's not just a player, but it's his attitude as a person – he's a phenomenal person.

"He's very noble; if he has to say something, he says it to your face. He's direct and I like that.

"He's very important, the captain and leader of this club. He got here when he was 20, I actually played with him for a year, and he hasn't changed.

"He's still here, so that means he's been doing a good job."

Saturday's 2-1 win at Getafe was by no means vintage Madrid, but it saw them show their character by scoring a late winner, Cristiano Ronaldo claiming his first league goal of the season.

Zidane saluted him for breaking his duck and praised Ronaldo's professionalism after a difficult start to the campaign.

"He works hard, not just in the game but he's a professional. He's always the first one out, last in on the training ground. I've a lot of respect for him, it's not easy to do what he does.

"He wants to improve always. In the Champions  League he has lots of goals and we want him to be comfortable and keep doing that [scoring goals]."