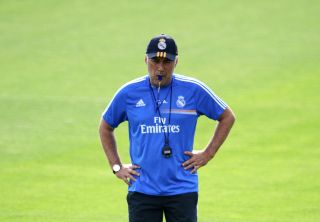 The Wales international has been expected to leave Tottenham for Madrid throughout the European transfer window with the La Liga club rumoured to be preparing a record fee for Bale.

But with only a fortnight to go to get the deal done, there is a growing sense Madrid are losing interest with Ancelotti's comments to Italian newspaper Corriere dello Sport just the latest hint Bale may stay in London.

After Tottenham manager Andre Villas-Boas lashed out at Ancelotti for discussing Madrid's interest in public, the 54-year-old Italian coach, who has joined Real from Paris Saint-Germain, does not want to talk about Bale anymore.

"Will Bale arrive? Today I say no, as there are no new developments," Ancelotti said.

"When I spoke about this recently, Andre Villas-Boas complained, so it's a delicate issue to discuss."

Ancelotti also compared Madrid to AC Milan, one of the six clubs he has previously coached, saying the two outfits have a 'special atmosphere'.

The Italian believes that has something to do with the presidents of the two clubs, describing Real's Florentino Perez and Milan's Silvio Berlusconi as the leading fans of both outfits.

"Real are always the same, as the club goes beyond players and managers," Ancelotti said.

"There is a special atmosphere and, like Milan, you can sense the history.

"It's no coincidence the two clubs can be compared.

"Florentino Perez is Real's top fan, in love with the club just like Silvio Berlusconi is with Milan."