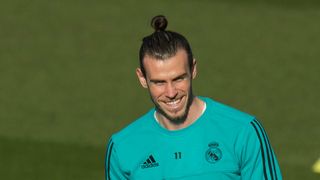 Gareth Bale will make his first start since September after being named in the Real Madrid XI for the first leg of their Copa del Rey tie with Numancia on Thursday.

Bale damaged his calf in a Champions League game against Borussia Dortmund on September 26 – a match in which he scored a stunning goal – and consequently missed two months of action.

The Wales international also sustained a thigh issue but made his return in the previous round of the Copa del Rey against Fuenlabrada at the end of November, providing a glorious assist moments after his introduction.

Another calf problem then consigned Bale to longer on the sidelines, although he featured in Madrid's Club World Cup triumph in December, and he gets the chance to prove his fitness in Cristiano Ronaldo's absence.

Bale is one of the few senior stars on show for Zinedine Zidane's side at Numancia, with young talent including Theo Hernandez, Jesus Vallejo and Borja Mayoral included in the starting line-up.

Zidane is marking the second anniversary of his appointment as Madrid's head coach, with the Frenchman under pressure after a 3-0 home thumping at the hands of rivals Barcelona last month.