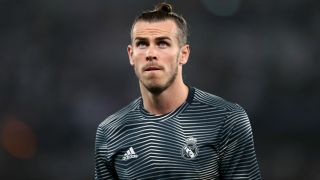 Gareth Bale lacks the qualities to be the leader Real Madrid need now that Cristiano Ronaldo is not at the club, according to former forward Predrag Mijatovic.

The injured Bale had to be taken off at half-time of Thursday's 2-2 LaLiga draw with Villarreal, when Madrid were leading 2-1.

It was the 11th occasion this season that the Wales international has been substituted in the top flight and the 15th in all competitions, underlining the persistent problems he has had with injuries over the last three campaigns in particular.

And Mijatovic, who won four trophies with Madrid between 1996 and 1999, has questioned whether Bale can fill the void left by record goalscorer Ronaldo, who joined Juventus in a €112million deal in July.

"It's a shame about Bale," Mijatovic told El Larguero."I like him, but he is nowhere near being a leader at a team like Real Madrid after Cristiano's exit. It is worrying that he injures himself so often."

15 - Gareth Bale has been subbed off more times than any La Liga player this season in all competitions (15). Injured. pic.twitter.com/znqXlL79KH— OptaJose (@OptaJose) January 3, 2019

Mijatovic was left dumbfounded by the substitutions made by head coach Santiago Solari in the draw at Estadio de la Ceramica, in which Santi Cazorla scored the crucial equaliser in the 82nd minute.

Luka Modric, who had been battling flu in the build-up to the game, was replaced by Federico Valverde 64 minutes in, while Vinicius Junior was a late attacking change for Toni Kroos.

"If a player starts the game and feels good, [let him continue]," said Mijatovic. "If he asks to be substituted, then that is one thing, but if not, I do not understand.

The result means Madrid are fourth in the table, seven points behind leaders Barcelona after 17 matches.

Mijatovic, scorer of the winning goal in the 1998 Champions League final against Juventus, admits it is tough to watch Madrid struggling this term.

"I find it hard to watch Real Madrid this year," he said. "They were good in the first half and when we all thought they were going to carry on, there was a disastrous second half and no play."

However, Mijatovic does not expect Madrid to spend money in the January transfer window, adding: "I think that Madrid are not going to make any more signings. Signing a player who can offer a good performance will be difficult."