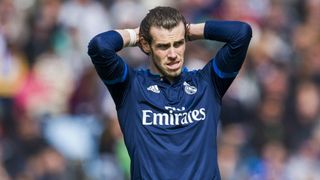 Real Madrid legend Raul has hailed the way Gareth Bale has become a key figure at the Santiago Bernabeu over the past three seasons and feels the Wales international perfectly "understands the club's values".

Bale joined Madrid from Tottenham in September 2013 and has since won the Champions League twice, the Club World Cup, Copa del Rey and UEFA Supercup.

Raul is particularly impressed with how the 26-year-old has adapted to life at the Bernabeu, though, and believes he has a bright future ahead of him in Madrid.

"He has scored big goals for Madrid and you can see that he is more and more integrated in the club and really understands the club's values," Raul told AS.

"He looks more comfortable when he is playing and in everything he does.

"Individually he is powerful and has a great shot on him. He has certain qualities that really help Madrid."

Bale, 26, netted 19 goals in 31 appearances in all competitions last term.