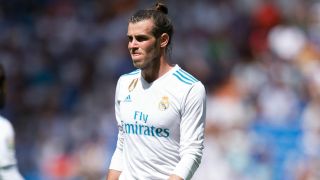 After winning the UEFA Super Cup and crushing Barcelona in the Supercopa de Espana, having claimed La Liga and the Champions League last season, many expected Madrid to cruise domestically.

Bale – with only one goal in five matches in all competitions this term – has been targeted by boo boys at the Santiago Bernabeu and the Wales star said the Spanish and European champions are determined to get back to winning ways.

"We must keep calm and keeping going game by game," Bale said Friday at a sponsorship in Madrid following the club's victory in the Champions League midweek.

"We had a good start to the season with the two Super Cups, but we want to keep winning things. At Madrid we always want to win everything."

Madrid are away to high-flying Real Sociedad on Sunday – the visitors level on points with Barca after three games.

The Anoeta Stadium has been kind to Bale, who has scored in each of his three visits to San Sebastien.

"It has been a good stadium for me," he said. "The most important thing is that we win the game, and get the points to climb the table."