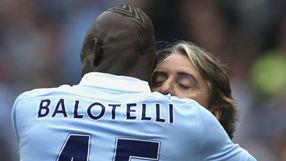 Controversy has followed the Italian from his rebellious teenage years at Inter Milan to City where his latest indiscretion was another red card in the weekend defeat by Arsenal.

Media reports have speculated Balotelli could be sold to boyhood club AC Milan in the close season given his catalogue of bad behaviour but Mino Raiola has denied the rumours.

"I am in Manchester but not for any transfer business. I have talked with Mario and Mancini, there was a moment of tension but now the situation is calmer," the agent told Sky Italia TV.

"Mario has understood his errors, he is special in every way, sometimes he makes mistakes without meaning to. There is enormous pressure from the fans on Mario but Manchester City do not intend to sell him.

"He must grow here then in one or two years, we'll see," added Raiola.

Mancini knew about his compatriot's wild streak having managed him at Inter but still brought him to Manchester in August 2010 for 22 million euros.

Some fans are blaming the 21-year-old, whose escapades away from the pitch include setting fire to his bathroom with fireworks, for mega-rich City slipping five points behind leaders Manchester United in the race for the league title.

However, Raiola said that although Balotelli will finish his career in Italy, trophies with City are his immediate priority.

"He must stay here, it is not true he is unhappy. When he leaves England he will do it as a winner," the agent said.

Balotelli's antics have led Italy coach Cesare Prandelli to question his presence in his Euro 2012 squad.