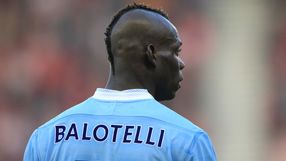 The Italian has found himself in the headlines for all the wrong reasons once again recently, despite netting a brace in the recent 3-3 draw with Sunderland.

Balotelli has regularly found himself on the front and back pages of the newspapers following his arrival from Inter Milan in 2010.

However, Mancini believes the media are over-hyping the actions of the youngster, who has 17 goals in all competitions this season.

"There are some people who think bad things against other people, like Mario (Balotelli)," the City boss said.

"Every time Mario does something, (it) is like a war.

"There are other people on and off the pitch that do worse than Mario and no-one says anything because maybe they play for an important team or are not like Mario."

Mancini did acknowledge that the 21-year-old could do more to keep himself out of the media spotlight, adding: "I would like Mario to play, score and finish the other situation.

"It is not maybe your [the media's] fault - it is his fault because if he wants he can play and stay at home. Like this, no people can ask about the other situation.

"I think many people have different behaviour with Mario."