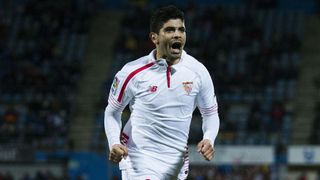 Inter have completed the signing of midfielder Ever Banega on a three-year contract.

The 28-year-old joins from Sevilla, where he spent two seasons - winning the Europa League in both campaigns.

"FC Internazionale is delighted to confirm that Ever Banega will wear the Nerazzurri shirt for the next three seasons," read the Serie A club's statement.

The Argentina international was long expected to sign for Inter as a free agent, although the deal was initially held up over a dispute, with Sevilla believing he had automatically triggered an extension to his contract with them.

The playmaker was sent off in Sevilla's tempestuous Copa del Rey final defeat to Barcelona in May, which turned out to be his final match in the club's colours as then-boss Unai Emery confirmed the player's exit after the game.

"I had a great time in Spain. It has been two wonderful years and we won two Europa Leagues."

Banega has 47 caps and most recently represented his country as they finished runners-up at the Copa America in the United States.

This is the first time Banega will have played in Italy, with his previous career limited to Argentina and Spain, having had spells at Boca Juniors, Valencia, Atletico Madrid and Newell's Old Boys prior to joining Sevilla in August 2014.